EFT Tapping for Money: How to create Financial Abundance

EFT Tapping for money is the topic where Nick Ortner shines. He first spoke about it at the Tapping Summit in 2013 and continues to run courses and write about it in his books. 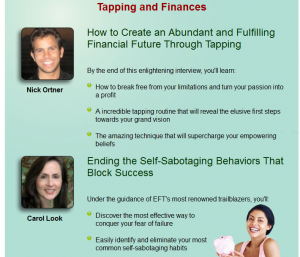 How To Create an Abundant and Fulfilling Financial Future Through Tapping.

EFT tapping for money is topical today because money worries plague millions of people. This is according to the American Psychological Association which estimates that 73% of Americans think their biggest stress is money.

EFT tapping for money issues is  a proven tool for clearing blocks to success and financial abundance.  Nick Ortner shared how his family were a million dollars in debt when he first set out to use EFT tapping to heal his money issues.

He applied EFT tapping to the situation and to create worldwide interest in Emotional Freedom techniques by producing the movie The Tapping Solution/Try it on Everything. Then he launched the Tapping Summit and attracted the attention of Hay House to publish his book.

Below is how he approached his talk including many tapping scripts on clearing anxiety and worry about money plus healing inner beliefs and conflicts about money.

In the Summit workbook of 2013 Ortner provided 105 limiting beliefs vs 105 empowering beliefs to help you get clear about money and success using EFT tapping for money.

EFT Tapping for the Newtown tragedy

Nick Ortner is a resident of Newtown, CT and his concerns expand beyond EFT tapping for money to help the victims of the Newtown shooting tragedy of 2012 both by raising money and helping those affected with tapping.

Nick worked closely with parents, first-responders, teachers, students and many others from the community using Tapping to help them overcome the overwhelming emotions that have come from that day.

“In my attempt to heal from the tragedy of losing my son in a tragic shooting, an experience that has broken my heart and made me question going on with my own life, I sought many different types of help.

Initially I sought traditional ‘talk’ therapy that left me re-traumatized and feeling worse.

Nick Ortner introduced me to Tapping and I always finish these sessions with a deeper understanding of myself, feeling better, with a lightness of being, and hope.”