Tapping World Summit: Healing the trauma of Newton CT while helping Yourself 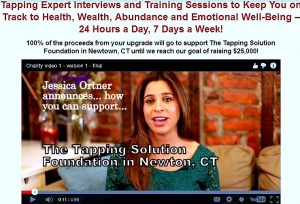 If you missed any of the fabulous free presentations of the Tapping World Summit 2013 – or want to re-listen and tap along… then here’s your chance to upgrade and get them all plus transcripts, workbooks and tons of audio bonuses – while at the same time supporting a worthy cause: The Tapping Solution Foundation.

Click on the image above to see a video where Jessica Ortner reveals that she and her brothers Nick and Alex, the producers of the  Tapping World Summit, have started The Tapping Solution Foundation and are donating 100% of all purchases of  Summit upgrade packages – until they reach their goal of raising $25,000 towards the work being done in Newtown, CT (where they also happen to live).

This is as part of the work being done by the Ortners worldwide helping people dealing with difficult situations like veterans with PTSD, genocide survivors in Rwanda, and those traumatized in Newtown, CT following the shooting of innocent children, teachers and others in December 2012 at Sandy Hook Elementary School.

The Ortners have actually been working with those most heavily affected in Newtown, including parents who lost children that day, first-responders,teachers and parents from the school and many others from the community.

“In my attempt to heal from the tragedy of losing my son in a tragic shooting, an experience that has broken my heart and made me question going on with my own life, I sought many different types of help.

Initially I sought traditional “talk” therapy that left me re-traumatized and feeling worse.

Nick Ortner introduced me to Tapping and I always finish these sessions with a deeper understanding of
myself, feeling better, with a lightness of being, and hope.”

If you want to see just how powerful Tapping is and can be for you, while at the same time discovering a meaningful way to help those of Newtown, CT, and others in the world dealing with difficult grief and trauma, then grab your upgrade packages/bonuses for the World Tapping Summit 2013 .

You’ll be glad you did!