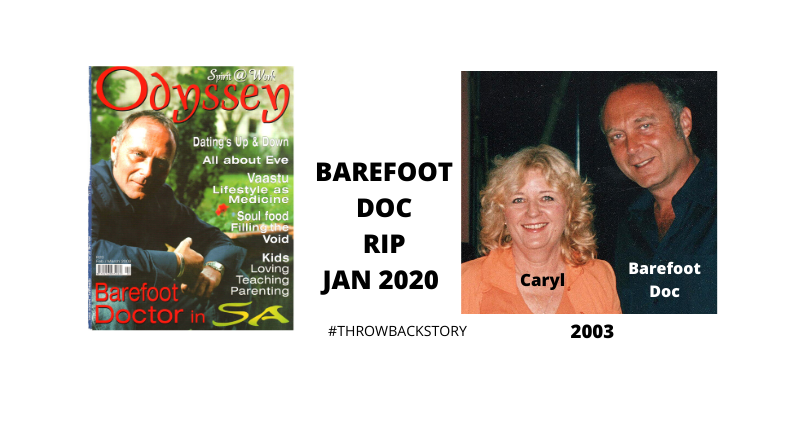 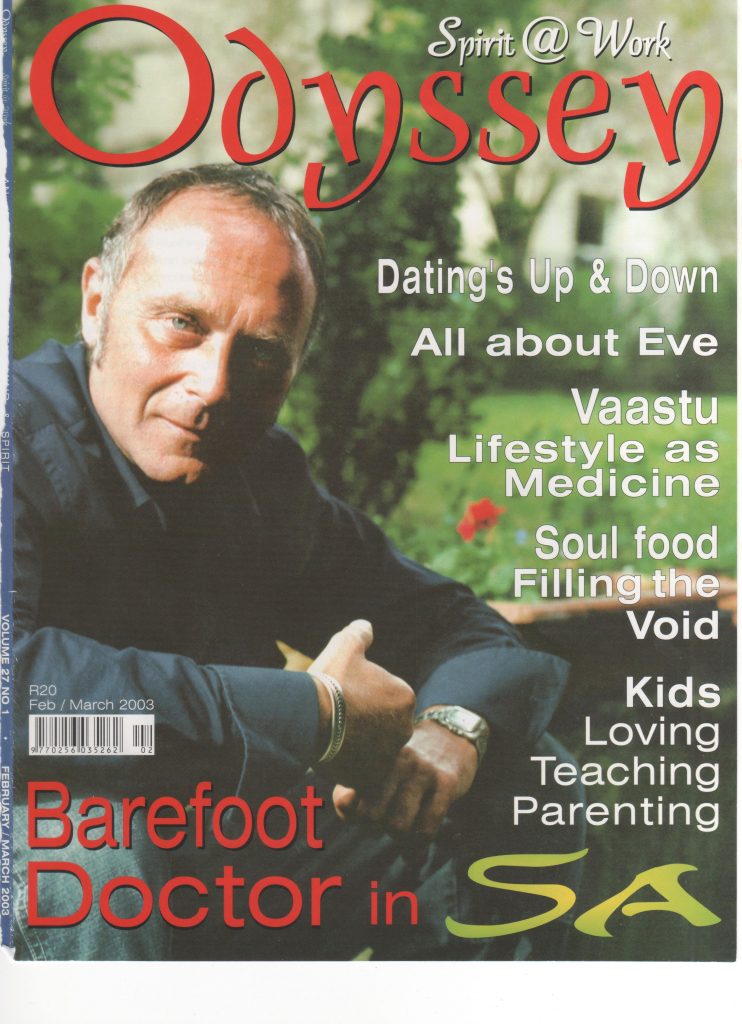 The year was 2002 and I was a divorced 50-something journalist and publicist for self-help authors visiting South Africa.

I knew he had a reputation as a bit of a “rake” – but our friendship was deeper than mere physical attraction.

He became one of my clients and I grew fond of his self-deprecating humour and loving kindness to everyone he met during his trip to Cape Town to open the Body Mind Spirit Festival of 2003 – and give Taoist workshops in Johannesburg.

I had flown over from Cape Town to London for an event with another of my clients, Brandon Bays, creator of The Journey.

So it was perfect timing to fit in an interview with Barefoot Doc – a few months prior to his arrival in South Africa in 2003.

After his visit – which included a trip to visit Sangomas in Johannesburg, he wrote an article for Odyssey entitled: “South Africa is not for sissies…”

I accompanied him as his promoter and driver during his workshop tour in Cape Town and in Johannesburg (though we hired a bodyguard-driver for security reasons).

We grew fond of one another – and continued to email each other for some time after he went back to write his next book in Spain. I’ll never forget the question from a workshop participant as I shepherded Doc to his next book signing: “How long have you two been married?”

This is an excerpt from the Odyssey article, Feb/March 2003.

Tall, lithe, strong and energetically powerful with piercing blue eyes and a good sense of humour, you suss that beneath the banter is a man who lives his truth in freedom as authentically as he knows it, moment to moment, in true Wayward (his own brand of) Taoism.

It’s a heady mix that’s just (to coin his own phrase) damn sexy.

“It means doing whatever you can get away with – using your body/life as a spiritual temple but also a nightclub,” he smiles.

He has the essence of a naughty boy, a rascal, and he plays it up.

He says I can call him Doc. I do know his real name (Stephen Russell) but has renamed himself in the tradition of the ancient Chinese healers schooled in the Taoist arts of hands-on energy healing, acupuncture, herbs, joint manipulation, simple psychotherapy, martial arts, chi gung and performance art (Doc’s also a guitarist and singer) who would go from village to village using their skills to heal the people and them remain in good spirits.

They would go barefoot, modestly and unarrogantly.

“Do you mind me being a bit silly?” he says, eyes twinkling as we settle down for the interview with a cup of tea in his London flat.

Having spent my entire plane trip from Cape Town to London totally immersed reading his books steeped in his wise yet irreverent, humorous, quirky prose, I’m not surprised really.

Later he shares the healing power of laughter.

“I qualified as a doctor of Chinese medicine after years of apprenticeship with Master Han in New Mexico more than a decade ago. While he taught his students the skills of acupuncture, energy healing, bone setting and the art of Tao, Master Han also insisted we wouldn’t qualify until he heard laughter coming from our patients’ cubicles for a period of no less than six months.

It’s Saturday 6 pm when we meet and although he no longer practices hands-on healing for a living, on this particular day he has devoted himself to his calling – asking clients to make a donation to charity in exchange. I guess he likes to keep his hand in, being as busy as he now is with his best-selling books, marketing his Barefoot Doc range of fabulous energising unisex toiletries called Chi/Qi (cheeky – get it?) range and expounding healing teachings in the media via television, radio, newspaper and magazine columns (his Observer and Good Housekeeping columns reach more than 1 000 000 people).

He’s a genius wordsmith who churns out thousands of words elegantly and wittily with magic and unstoppable fingers. On his website, he writes a daily diary-style DocBox column which gets half a million hits a month. He also magnetizes over 300 emails a day (which he seems to conjure up the energy to personally reply to – empowered it seems to send distance healing energy and love along with his words).

His latest book Liberation focuses on “selling” freedom from stress, depression, anxiety and anything blocking your enjoyment of the moment. He writes in the introduction:

‘If you find the key to liberating yourself from fear, greed, frustration and other path-blocking negativities, then you unlock the prison door and walk free. In so doing, you become self-liberator and hero. Hero, because as soon as you are free, anyone privileged enough to be drawn into your personal orbit will also themselves be freed instantaneously. Freedom is infectious – and ultimately unstoppable.’

It’s this total freedom in the flow of his own brand of “Wayward Taoism” that makes Doc such a compelling paradox of personae. Silly and Sexy. Powerful yet vulnerable. Living in total surrender to life while warrior-like, he harnesses the magical chi which he calls “invisible love in action.”

On the one hand, disciplined in his daily morning two to three hours of Taoist practice, yet also openly disclosing in his writings (and to me, off the record) that he’s as flawed and ‘addicted’ as you or I. 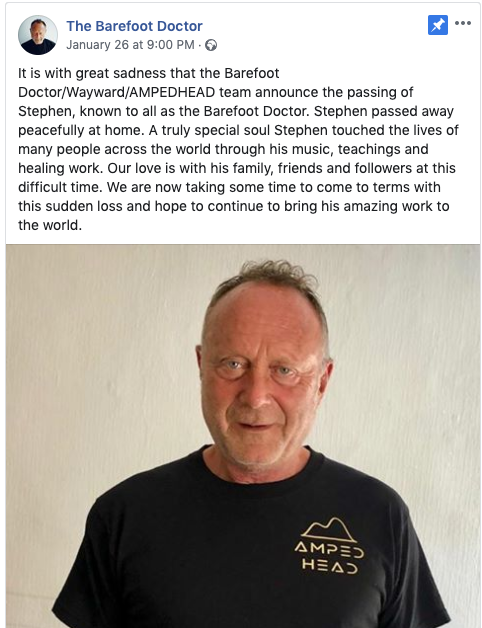 Others posted in by the hundred –  sentiments like this… 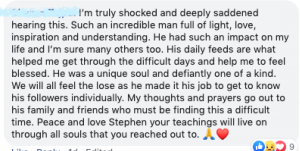 How can I sum up this complex, multi-talented Wayward Doctor called Barefoot – or Doc?

Rest in Peace dearest Barefoot. Your wit, music, love, and positive affirmations live on forever in my heart and in the world.