Ever wondered why money  “keeps slipping through your fingers like water” leaving you broke and fearful?

Fed up with the way money hijacks your happiness, steals your dreams, or gives you nightmares and sleepless nights?

Plagued by beliefs that you’re worthless, not good enough, shameful, and need to “work harder”?

Let me share a story of one of my clients who I will call Jenny (not her real name).

It’s a real-life case study which I describe in my book “You Can Break Free Fast EFT Tapping, Emotional Freedom Techniques – 3 Simple steps to get Unstuck and attract the life you love.” 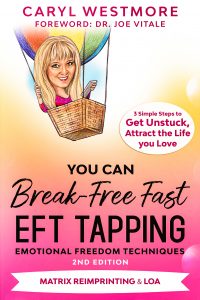 It demonstrates how vulnerable and impressionable we are as young kids to what we learn from our parents, caregivers and family patterns. And highlights what I call ” GOAL TRAUMA” – hidden goal stoppers keeping us from our dreams and goals.

MONEY “RAN THROUGH HER FINGERS”

Jenny came to me devastated because despite having a good job and doing all the right things to create wealth, money just slipped through her fingers, as she tearfully described it.

She told me of a recent example when she got her year-end bonus.

“In the next post I also received a back claim for my taxes that cancelled it out. I happens all the time.”

Using EFT tapping and Matrix Reimprinting we sourced and cleared two major money traumas – one at the age of four and one at the age of 10 – which had been running her life unconsciously when it came to money.

This all changed when she had her “break-free-aha” in her session with me.

I began the session by asking Jenny to hold some cash notes in her hands – as if she had a phobia about money itself – and sure enough she began to shiver and shake uncontrollably as if the money was red hot or a poisonous spider.

As we tapped and talked, the following memory surfaced.

Jenny (4) had found some coins in her mother’s cupboard. The shiny glittering nature of the coins enthralled her because at that age she had no concept of money.

Her mother, who often used a strap to punish her, came home to find her playing happily with the coins. The resultant thrashing which was accompanied by her mother screaming at her that she was a “a bad girl and never to touch other people’s money” left an indelible scar on her emotional brain and psyche.

After we cleared the incident, Jenny still had a fairly high score of remaining anxiety when I tested her further as we do in an EFT session. This signalled to me that she had another memory connected with this money issue.

I asked: “If there was another time when you got frightened about handling money…when might it be?”

This time she remembered that when she was 10 her friend from next door came over with the equivalent of an R50/$50 note, and they went on a spending spree at the local sweet shop, which soon got back to their mothers.

Having been shamed and physically beaten again, it’s understandable why Jenny had such an inner fear around holding onto money. Thanks to connecting with her Little Girl as we do in EFT-Matrix Reimprinting, Jenny cleared the traumatic effect of her childhood memories both by EFT tapping and also dialoguing with her mother, finally realising she was doing the best she could with the resources she had – and forgiving her.

More importantly, Jenny soothed and connected with her vulnerable Inner Child, promising her she would love and protect her from now on when it came to money.

Using the tool of Matrix Goals Reimprinting I took Jenny to her Future Self, five years ahead.  I stayed silent as she saw herself as hugely prosperous and money savvy…creating wealth and handling money with confidence and joy.

I encouraged her to:

Manifest Money faster with these ideas:

Yes, you can break free of your crippling money story…like I did …going from broke and broken hearted 20 years ago to living my dream life today – financially free and fulfilled in love, creativity and life purpose.

After 1000s of hours working with clients from all over the world I can tell you your woes about money are never what you “think”.  They lie buried in unconscious beliefs and energy blocks hidden far from your conscious thinking mind.

As within so without. If you want to know what you truly believe deep down, look at what your life out-pictures.

“But Caryl,” I hear you cry, “I’m a positive thinker and believer in vision boards, affirmations and gratitude journaling…what am I doing wrong?”

The truth is that beliefs formed in early childhood – and even in the womb – can be running (or ruining) your life NOW.

Plus pay close attention to the patterns from your FAMILY OF ORIGIN.  Passed down through the generations.

And in some cases, working in the MATRIX OF PAST LIVES proves liberating and a key to your persistent patterns.

The emotional belief seeds planted in the past can contaminate your life now and block you from the Source of all abundance as surely as the root cause of any phobia or fear can keep you stuck or hopeless.

Which is why I say first off you need to BUST THE BELIEFS that come from your family of origin, society and some religious teachings when it comes to money.

Take the story of the actress who was living from and to mouth in Hollywood and could not understand why, despite all her talent, success eluded her.

Then she did some inner work and suddenly remembered her father taking her for drives in Beverley Hills, stopping outside the film star mansions and saying with intensity to his impressionable daughter: “Don’t YOU ever become like those rich bitches…they’re trash even with all their money.”

When she learned to erase this negative imprint and boosted her beliefs with healthier ideas about abundance, money and success…everything changed dramatically in her financial reality.

The best way I know to erase a negative imprint like this is with Emotional Freedom Techniques (EFT Tapping). And to change your reality going forward…I suggest Matrix Reimprinting which is like the Law of Attraction on steroids!

This is the stage to inquire of a client what negative BELIEF was formed at the time of the incident. Was it absolutely true? And did she want to hold onto it?  If not, we can then “bust it” or “flip it” to erase its impact. We then BOOST her belief system with new empowering beliefs about money.

So within 60 to 90 minutes Jenny was offered a real chance to change her life and her future.

We know this for sure, thanks to thousands of reports worldwide in the past 20 years on the efficacy of EFT Tapping; ongoing scientific research on the neuroplasticity of the brain and proven studies, especially with war veterans in America, as to how  EFT Tapping can release past trauma and re-train the brain.

Your unconscious mind loves metaphors so I adapted this concept from Financial Alchemy and Abundance Money coach Morgana Rae to be in a great loving relationship with money.

Firstly she recommends personifying Money as a negative “Money Monster” character, consisting of all your worst memories and fears growing up and in the past.  This is a repulsive abusive Monster who lets you down and causes you continual grief.

You need to break up with him fast – or in some cases kill off, outlaw, erase him from your life permanently.

In his place, you must rapidly, radically and permanently create a Money Honey or adoring Money Lover who is charming, handsome, generous, wise and caring and who falls in love with you!  He has your back, will whisper money-making wealth-creating ideas in your ear –  and you are both magnetically attracted to each other.

By imagining and interacting with him like a real person, you connect with money on an emotional, heart level – not just mentally.  And the results you will get – often immediately – are worth giving it a try

To sum up my advice:

Contact me for an “Abundant Money Mindset” Break Free session – or choose any other issue where you need help getting UNSTUCK.