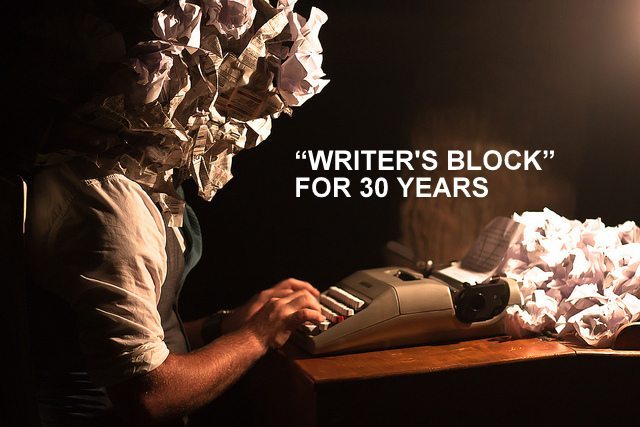 Writers (and Creatives) – listen up – can you identify with these 4 proven tips I’m sharing below to avoid WRITER’S BLOCK?

If you can say hand on heart YOU never get mired in Writer’s Block… then you’re a unique unicorn in the world of creativity.

But surely you can identify with the cruel fate of a writer called Joseph Mitchell who went to his death bed at 87 with 30 years of non-writing hell in his wake?

I say hell because it is my idea of hell.  Dying with half finished yet definitely helpful books, courses, podcast episodes UNDONE. (Honestly, I have to stop and do EFT Tapping for the sheer panic that threatens to overtake me just writing that last sentence).

Can you imagine the pain, frustration and sheer humiliation of being mired in writer’s block that seems to last forever – and goes on for 30 years – until the day you die?

What, if to stack the angst, you showed up for work for all those 30 years at a prestigious magazine – the New Yorker – where your work once dazzled?

This is NOT an “urban legend” – but a true story. 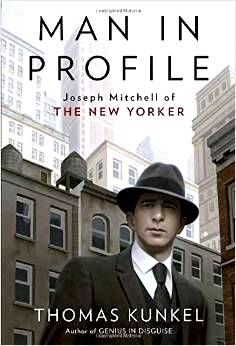 Writer’s block until the day he died. Credit: Amazon

It happened to brilliant nonfiction writer Joseph Mitchell as described in his biography by Thomas Kunkel: Man in Profile, Joseph Mitchell of The New Yorker (Random House, 2015)

Co-workers watched him arrive at the New Yorker for 30 years, close the door of his office to “work,” heard the sound of typing inside – and even lunched with him.

Yet he simply produced nothing publishable.

And still collected his paycheck at the end of every month.

What exactly was Joseph Mitchell doing all those years at ‘The New Yorker’?

Kunkel, his biographer, gives us an insight into what happens with the worst kind of writer’s block – brilliant ideas, even years of research (in his case one of his projects filled seven filing cabinets)…all come to naught.

Or what Stephen Pressfield calls RESISTANCE?

“A writer who waits for ideal conditions under which to work will die without putting a word on paper.”

Here are 4 Ways you can cure the prolonged suffering of protracted crippling Writer’s Block. 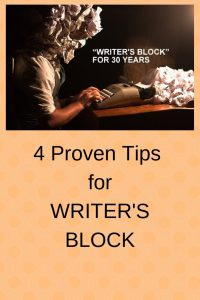 Have an accountability partner/boss/publisher – and a deadline.

When I was a cub reporter on the Daily News in Durban, South Africa, I soon discovered that my agonising over a story was unthinkable.

I was fresh out of University with an English degree and prone to taking weeks to write an essay.

Deadlines dictated that I had to get my story in on time – and let the sub-editors do their job before publication.

I’ll never forget having to phone my first story through to the newsroom from the hospital where the subject I had been sent to cover had given birth to triplets.  The deadline for the next edition was imminent.

Breathlessly I phoned the newsroom with the following news-gripping title to my article: “It’s a boy, it’s a girl, it’s a girl,” followed by three quick paragraphs which I had sketched out in my journalist’s notebook.

Looking back over my years in journalism, I wish I had discovered the stuck-busting, confidence-boosting, energy psychology coaching tools I share now in Tip #2.

It would have shaved many stressful hours off my writing career and boosted my productivity.

Perfectionism and Procrastination are like the evil twin-sisters of Writer’s Block.

Ever felt like you were in a tug-of-war inside, pulled in two directions at the same time?

You want to get started moving forward with your writing project –  but can’t, don’t or won’t?

When my clients get frustrated and say they are procrastinating, I usually stop them in their tracks and reframe their pain like this:

This comes as a huge relief because they can then address the part that is holding them back and so end the inner conflict.

It means they can start to see themselves as “producers, not procrastinators” and complete their book projects with renewed energy and success.

Today I’m the author of 5 self-help books on topics as varied as goal success and online dating.

Each book has at its core the revolutionary idea that “talk therapy” is often useless when it comes to healing deeply buried emotional pain or early-life traumas. Which I believe are often at the core of blocks for artists, writers, and creatives.

Not to mention finding love and enjoying great relationships.

Why? Because talking mainly accesses the cognitive thinking part of your brain

Tapping goes to the fight-or-flight amygdala in the limbic system that was likely hijacked by a part of you who is still frozen as a victim of your past.

In 60 minutes or less a client helplessly stuck in the quicksands of Writer’s Block can break free.

I’ve seen how childhood events traumatise clients to fear expressing themselves as writers or creatives.

I call it “goal trauma”.

I may not be totally immune to Perfectionism (and it’s twin sister Procrastination) – but I can get help from a colleague in a stuck-busting session that shifts my energy, feelings, and perspective in less than 60 minutes.

I still have to remind myself each time I begin a new book or creative project to just show up every day and write and to edit later!.

This is the very same advice I give my clients.

I liken it to squeezing toothpaste back into the tube – because I have so much I want to say including stories from 100s of case studies – but if I agonize on getting it perfect – I could end up never having a first rough draft ready for editing.

This video is a good example going back 10 years when I wrote my first book and wanted to do videos – but I shared a great case study that proves my point, using EFT Tapping, don’t you think?

Say things like “Thank you for sharing…but I’m going to get it down in writing first…we can edit it later”.

This overcomes the Resistance and Perfectionism that says…not good enough.

So returning to Joseph Mitchell – what possibly caused his chronic Writers Block?

Having produced some brilliant pieces up until 1964 – Kunkel writes that Mitchell spent years compiling seven filing cabinets worth of research on one potential biography of his close friend Anne Honeycutt – and even attempted his own memoir – but he failed to complete them and like so many writers before and after him, died with his song unsung and his words unpublished.

Friends said one likely cause of Mitchell’s inability to finish anything was his strain of perfectionism, which had only grown more acute through the years with his literary acclaim.

I can only imagine that had his editor held him accountable, insisting he produce something publishable – or face getting fired – perhaps he would have rallied and overcome his resistance.

The Pain of Writer’s Block

His biographer does give us an insight into the pain of his situation:

None of this was easy for Mitchell, of course. He was acutely aware not only of the internal curiosity but also the growing number of people outside the magazine who wondered why on earth The New Yorker continued to pay a writer, notwithstanding his past accomplishments, who was not writing. “Joe had a hyperintelligence,” said Hamburger. “I’m sure he was aware of [what was being said]. Nobody ever stopped to think of the pain, how painful it must have been for him not to be writing.” On another occasion Mitchell lowered his guard on the subject with an old friend, the writer Roy Wilder Jr. “Sometimes I just wish they’d fire me,” Mitchell told him, “and I would go home to North Carolina.

Instead, his writer’s block lingered on until he died aged 87.

Don’t let this nightmare happen to you!

What’s the longest time you have sunken into a creative quagmire where you just could not write?

And what steps did you take to come out of it?

Leave a comment and answer this – which of these article tips will you use next time – presuming there may be a next time – you face prolonged, crippling writer’s block?