Michael Jackson and healing trauma in the “Inner Child” or ECHO 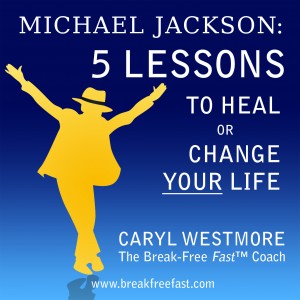 Michael Jackson: 5 Lessons to Heal or Change Your Life

Could Michael Jackson have healed his damaged “inner child” with tools like EFT and Matrix Reimprinting?

This was my first thought listening to interviews and documentaries about him and his early childhood.

When I wrote Michael Jackson: 5 Lessons to Heal of Change Your Life as an e-book  and later recorded it on  audio, it was a few weeks after Michael’s passing.  I was filled with compassion as replays of interviews with him, pointed to his longing and sadness about his “lost childhood”.

Since then, I have trained with Karl Dawson and Sasha Allenby, co-authors of the soon to be released book on Matrix Reimprinting using EFT. They refer to this childhood part of us as an ECHO (Energy Consciousness Hologram) and describe it as energy that gets stuck or “frozen” in time in terms of the fight, flight or freeze syndrome.

My clients often report feelings of shame and low self-worth when they think back to a childhood or teen memory when they did not fight back – or run away –  but felt frozen on the spot, silent in the face of threat. “Why didn’t I say ‘STOP’?” they often ask me. The answer is because in the wild when an animal is being chased by a predator and losing hope of escape, they will collapse or freeze – a last resort which releases a flood of endorphins which will minimize the pain of an attack, should it occur.

A key factor here is explained in the work of trauma specialist Dr Robert Scaer, author of The Body Bears the Burden. Trauma is particularly damaging to children because it ruptures their boundaries necessary for feelings of safety – and this usually continues through into their feelings of being unsafe in the world as adults In the wild, an animal will shake, breathe quickly and perspire before running off.

But humans don’t have that releasing response. Hence the danger of long-held traumas frozen in time in our energy field…the body eventually cannot keep them at bay and they start to leak through to damage our health and well being. Today we can help release and repair the damage of traumas, big and small, to our inner child or ECHO.

For Michael Jackson, sadly this was not an option – but if we can learn something from that aspect of his life, we can contribute our bit to “save the world and make it a better place for you and me and the whole human race”.

What do you think?  Can Matrix Reimprinting using EFT heal the damaged “inner child”?