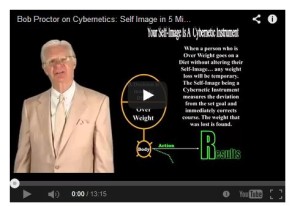 Self image is the key to your goal success – boosting your chances of achieving your dream goals – or dooming you to failure before you even start!

This Bob Proctor video explains the key reason why poor self image will doom your goal success.

“When a person who is overweight goes on a diet without altering their self image…any weight loss will be temporary.

I believe Matrix Reimprinting using EFT is the fastest way you can shift poor self image programs lurking in your subconscious – in 60 minutes of less!

But back in the day, these life changing tools were not something  Proctor had access to.

Yet to his credit Proctor has, like many modern day self-help gurus, endorsed EFT tapping via The Tapping Solution.

His best advice previously was to use repetitive vivid imagery and affirmations over 21 to 30 days to counter-act the sabotaging affect of poor self-image imprinted in the subconscious from early life experiences.

In this video Bob Proctor refers to Dr Maxwell Maltz, author of 1960s bestseller Psycho-Cybernetics. which describes how cybernetics, the science of how guided missiles self correct to stay on track with their target can be applied to human psychology.

Maltz pioneered the concept of applying cybernetics and working on self-image through his work as a plastic surgeon.  What puzzled him was why a minority of patients were no happier after their operation than before, even if disfiguring scars or other malformations had been removed.

The golden key to a better life, said Maltz was inner work on self-image. Poor self-image was set up in a patient’s earlier life experiences which made them feel ugly from the inside out.

He concluded: the brain thinks in terms of images, therefore if you can consciously create the desired image of yourself the brain and nervous system will automatically provide itself with constant feedback to ensure that it ‘lives up to’ the preordained image.

Reimprinting self image and self-belief

Thanks to Matrix Reimprinting this can be accomplished by helping your client find the source of their poor self-image  in early childhood experiences and reimprinting new empowering beliefs and self-image – at that time “in the matrix”.

She believed “all men are pigs”

An example is my 50-year-old client who I will call Heather (not her real name).  She repeatedly described the men in her life – – as “pigs” and repeated stories about the many times she had been victimized by previous bosses and business partners.  A victimizing scenario where she was owed  a large amount of severance pay but feared not getting fair treatment was playing itself out when she started working with me.

Almost immediately using EFT Tapping and Matrix Reimprinting, I took her back to an early memory in her teen years when her uncle had come into her room one night and raped her.  She never told anyone because she did not want to upset her aunt and family but the intensity of the trauma and the powerlessness she felt after that incident had set up a pattern in her life which seemed to prove all men were “pigs”.

There was also a key incident when she was six years old which she had never labelled as abuse – but which her adult self realized was totally out of line. As she interacted with this six-year-old self she encouraged her to do what she hadn’t done at the time – tell on the older male cousin involved.

Only when I asked her the question – “if a teenage boy did this to your daughter of six, would you let it go?”

“No way,” she replied indignantly, “I’d kill him”.

Using the re-imprinting tool, we completely changed the self-image she had lived with all these years – of a victim of men who behaved “like pigs”.  This made a huge difference to her life.

So what about YOU?

What gifts would you be able to express in the world and what goals would you achieve by nailing a poor self-image that will doom your goal success if left untended?